This is an agogo (sacred bell) used in the worship of Oduduwa. Oduduwa or Oddua is an orisha funfun (white orisha), he is the closest Lukumi deity we have to Olodumare. The difference between Oduduwa and Olofin in the Lukumi religion is that Oduduwa set foot on the earth, Olofin did not.

Odua’s agogo is comprised of 8 bells, 4 on each end of a metal scepter. It is rung in a solemn cadence. I beaded the handle using bone, ivory and white and darker shades of real mother of pearl beads. The path of Oduduwa this agogo was beaded for, Orisa Aiye, also takes accents of black, red, and green. 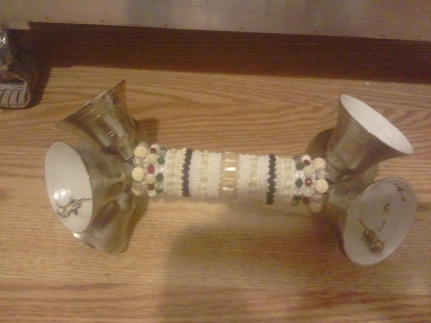