After kariocha, or becoming an olorisha, a further initiation some go on to receive (usually after many years) is the ceremony of knife. It permits the person to sacrifice but is more of a rite of passage to elder hood and symbol of attainment and authority. The obvious deity central to the initiation is Ogun, however, Obatala is also intimately involved in the symbology of knife and the status it confers.

Below is one of the first knives I beaded for a friend. It was commissioned as a surprise gift and in this person’s ile, the knife is beaded primarily in the colours of Ogun regardless of the guardian orisha of the person whose knife ceremony it is. I was asked to make the knife in Ogun’s colours with accents for Shango, the person’s tutelary orisha. 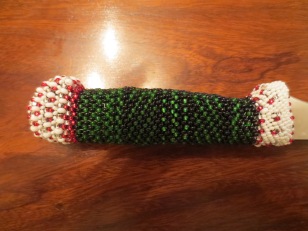